Recipe for earning from cryptocurrencies with Push
Author: Roman Smith

Having taken care of the issue of searching for new offers for draining, I often came across screenshots of arbitrageurs from MegaPush regarding drains on cryptocurrencies in the countries of the "T1"segment. These screenshots only whetted my appetite, encouraging me to work in this direction. But I don't need competitors, so I had to pay attention to other regions. And how much we managed to do it now we will tell you.

Offer: Crypto Genius LATAM and Weed Millionaire (pays $ 289 for deposits of more than $ 200)

The process of selecting the location and offer

Having chosen the vertical, we spent a lot of time choosing the partner program and the region of its offer. In the end, we preferred Adcombo, despite a slight discrepancy in the format. However, this later became a defining moment, given the already positive experience of working with these guys. And then, with our personal Manager, we decided on two offers for the same geolocation.

The geography was chosen with an eye on the cost of tariffs and the level of remuneration for adding funds to the account. There was no desire to engage in "expensive" regions, due to the presence of a bunch of competitors in them, as well as sky-high rates. And this promised us an obscenely expensive testing period. Consequently, the most inexpensive geolocation with a payment of $ 297 for each of the countries turned out to be our Latin American one. And the price of all countries (Spain does not count) was almost half a cent per click.

The approximate calculation made then gave an understanding that the payback of the Deposit will be a maximum of 150 thousand clicks. So it will easily go to zero. We could have done that. We did not dare to test offers with expensive bids, because usually it took two lead prices, but in the end, the thirst for profit won.

The process of draining

In the end, it was decided to send two offers to all nine countries of the region at once: four for each of the countries. We got a lot of cheap incoming traffic at average bid sizes. And the purchase was made only by mobile traffic from the main type, because testing and sorting everything else turned out to be expensive. The cost - per-click range here was $ 0.12 - $ 0.82, per click. And during the entire time of work, we filled in more than two hundred campaigns.

And from the first days of work, we got a problem: statistics did not see registrations, registering only deposits. However, we received data on registration in different countries every day from our Manager. However, over time, registrations were included in the statistics of the affiliate program. In addition, we are immensely grateful to its administration for significantly reducing the duration of the cold (before that, they were equal to thirty days).

And we raised the first Deposit with hundreds of dollars spent. This inspired me with optimism, which led to the creation of four more campaigns for each of the countries. And then, with an eye on the already available statistics on registered users and deposits made by them, we removed all Spanish ads and ads from the Weed Millionaire offer. And then the drain went exclusively from Crypto Genius LATAM to the eight States. They were also launched on the desktop in parallel.

Further, our bid increased slightly. Empty campaigns in terms of leads were not disabled, because during this time they have not yet managed to recapture at least the price of one lead.

The ads were re-served weekly in batches when images were changed, but with the same approach.

Since the population of our chosen countries is Spanish-speaking, it was much easier for us to work. During our work, we changed fifty creos, starting with frankly primitive ones and reaching images taken from search engines.

We often re-loaded these things.

The adaptation of the text part was entrusted to my friend who knows Spanish very well. The emphasis was on poverty and the desire to quickly raise different amounts of money, from the very first days. And sometimes we talked about debt, routine work, the desire to live richly, and that cryptocurrencies are the best way to wealth, led only by the "chosen ones". 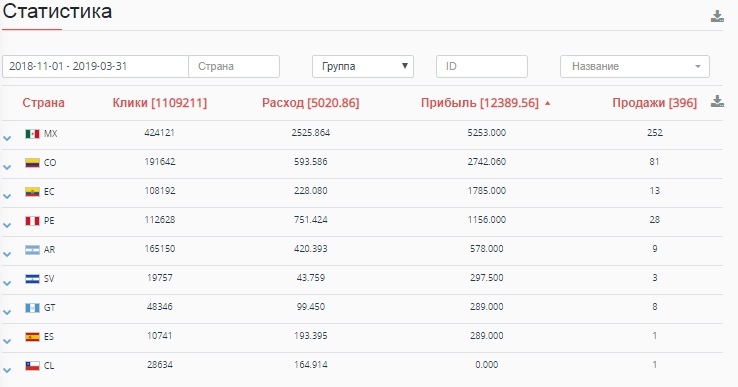 It is a pity that the Colombian statistics were diluted with a number of leads from a different offer, in the amount of $ 114, but we will close our eyes to them in the statistics. In addition, statistics show us a frequent shooting of postback from registrations, so let's look at all these countries separately.

Mexico was the most profitable, allowing you to earn 5 thousand 253 dollars. The funds spent here totaled 2 thousand 524 dollars. The net profit here was $ 2,729. And the ROI reached 108%. Here, people have topped up their accounts 18 times. Below are screenshots of the campaign with the display of the deposits.

Summary results for all geolocation:

The offer was discontinued due to increased competition: new companies came in and offered high bids in all directions. Therefore, we did not wait for the project to go into negative territory and switched to other offers. But now there are fewer competitors and if you look for new offers, a number of countries will give a couple of hundred dollars. You can also play around in these locations by enabling feeds.

And finally. Throw away all doubts. Test and verify. For a long time, I couldn't believe that the poor Latin American population could invest $ 200 each. But I am pleasantly surprised by this result. And this scheme has served for a decent period of time, allowing you to earn great money.

1) Sign up for recieving exclusive relevant case studies.
2) Sign in, if you already registered.
Recipe for earning from cryptocurrencies with Push
Author: Roman Smith