Recipe for earning from cryptocurrencies with Push

The topic of earning money on cryptooffers is relatively fresh, but both "white" and "black" pages have already appeared in its history. And this is against the background of the General fading of the unprecedented hype that we could observe relatively recently. But, on this topic and now you can raise good money. And to do this, it is not necessary to stick your nose into the quotes of various cryptocurrencies, which are now a dime a dozen. And if you want to earn money, you can try your luck in draining offers from the world of cryptocurrencies. And this case will help everyone who is interested in this topic.

So, before you start moving in this direction, you had to select the region under the drain. We had to search for it based on clear parameters, including:

impressive volumes of this very traffic.

Mexico turned out to be the country that best meets our requirements. It was there that the decision was made to pour traffic.

The next thing to decide on was the choice of an advertising network that could provide as much traffic as needed to a specific region. As a result of a short search, The adsterra site was selected. There were a variety of settings and targeting available, and the support was very friendly.

Then, choosing one of the many cryptocurrency offers, we began to consider different partner programs, communicated with their representatives and they were always ready to help in solving any issues.

This was the appearance of our landing page sharpened to drain traffic:

And since the advertising network allows you to rank the choice of users with an eye on their activity levels, we immediately began to tune in to highly active users. However, the partner specialist who worked with us recommended using all levels without exception, in order to attract large volumes of traffic. After making a rough calculation, we realized that without changing the settings, we would have about 933 clicks every day. But, due to the new settings, the volume of our daily traffic should have reached the figures of about 1,965 clicks. We were very impressed with the spread.

We built our campaign on the principles of pay-per-click. And the minimum builds offered by Adsterra added to our optimism due to their low prices.

For testing purposes, we made creatives. All of them are presented below:

And our texts, written in a language accessible to the average user, were full of clear appeals that encourage users to click. Well, we adapted the texts for the Spanish-speaking audience using an online translator.

We wrote our own texts on such topics as:

How to make money at home;

Get the secret of earning thousands of dollars a day;

First profit right now and so on.

Creatives had to create a first impression for users, so they had to be bright and able to interest. In addition, the landing page that led to the transition from the banner had to match the topic with the creative. Otherwise, there was a risk of simply losing the user.

Well, then, as they say, it's a matter of technology, or rather, landing. It was supposed to encourage users to do what we need, that is, register and make the first Deposit to the account.

We optimized the campaign itself in two steps. We have already said that we have used all levels of user activity. And this allowed us to attract an impressive amount of traffic. Well, then we sat down to analyze statistical data. And since the low conversion rate had a bad effect on the final ROI, we decided to play for an increase in the bid. And, as practice later showed, they did not lose. After all, the volume of clicks has doubled, and the conversion rate has quadrupled.

In addition, we tried to ban sites that did not receive conversions in a timely manner. Money was spent on them to no avail.

Well, having dealt with the optimization of your campaign settings, we had no choice but to rejoice in the receipt of passive income.

As a result, the final view of our campaign settings looks like this:

However, gradually the volume of conversions significantly sank, which led to the loss of this scheme. As a result, the date 30.08 was the last day of its operation. Perhaps, in this outcome, there was also our flaw in terms of reducing the rate to the previous level of $ 0.010. This move, alas, thoroughly spoiled the statistics, as evidenced by the screenshot below.

A screenshot of the final options of an advertising campaign: 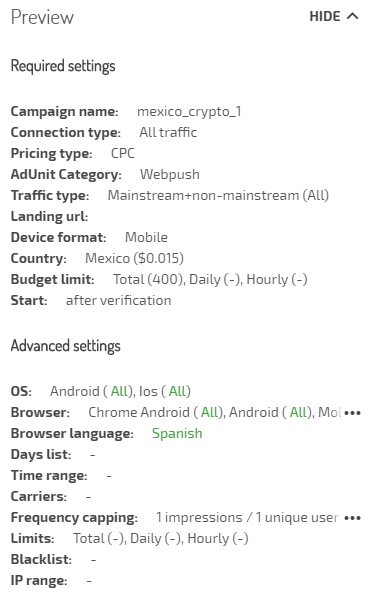 Screen of the advertising network Cabinet: 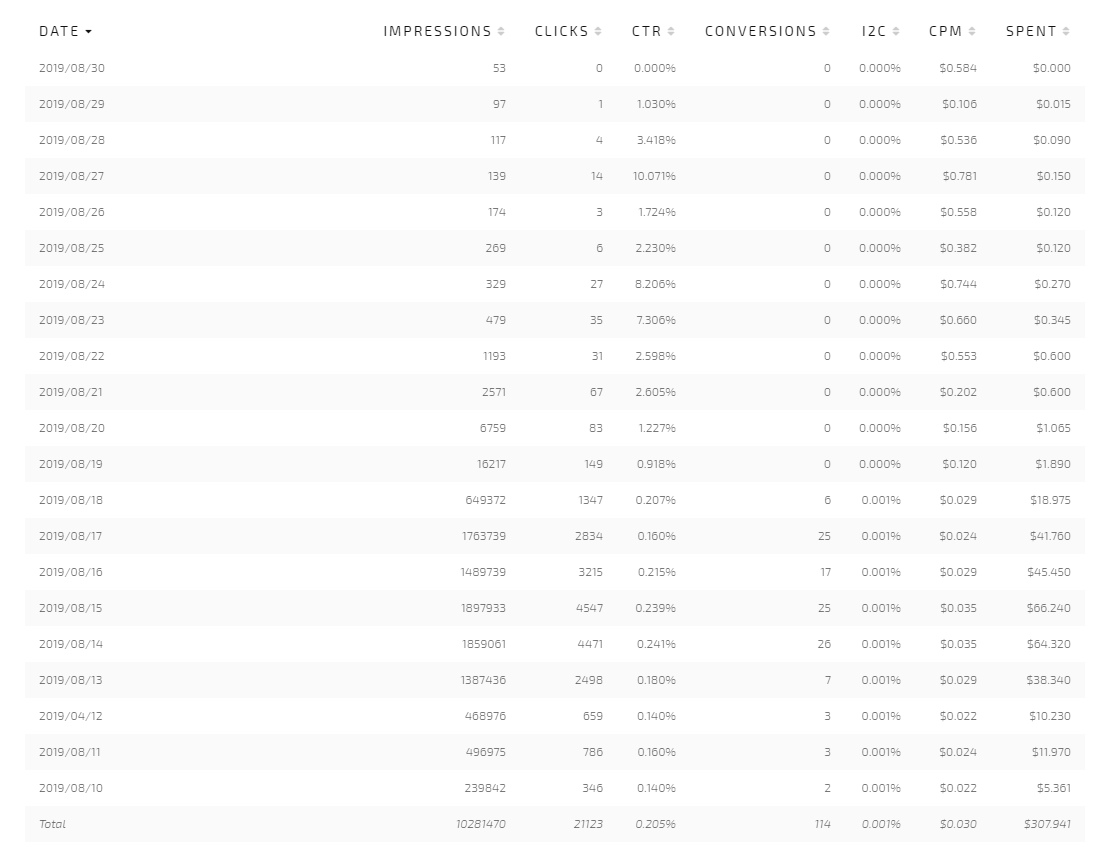 In total, it took approximately $ 308 to provide an advertising campaign for the entire duration of its operation.

Screenshots from the partner program account cannot be shown due to personal circumstances. However, in total, we received two deposits to the account with a minimum bet of $ 300, which is neither more nor less, but already $ 600.

Thus, we can safely say that our campaign ended successfully. The main thing, when organizing it, is not to forget about such moments as: testing, updating targeting, drawing up black lists, as well as searching for optimal bid sizes. And the success of your project is guaranteed!