How to be rich
Author: rayzl

Case for earning $14,000 with the famous Reduslim offer
Author: MaikLOL

Related to the level of sales
case study: How to get 73% ROI on solar panels in the USA!
Author: Sadie Flatcher

We go from one million dollars ARR to two in six months without additional investment-we make a profit against the background of the crisis
Author: Roman Smith

Now the volume of monthly profit (MRR) brought to my new projects MarTech Friendly recently exceeded a thousand dollars. And this is only after 94 days after the start of this project.

However, not everything is so simple, because I went to this success for a long two decades.

My rosy childhood dream was to take a leadership position in a food supply company. But, its implementation was constantly hindered by something.

And when I was a teenager, I had a disastrous lack of personalities to look up to.

By the time I was in my twenties, I was constantly being admonished to get a good education.

Well, by the time I was thirty, when I realized that I was finally emboldened, I was acutely aware of the lack of worthwhile ideas.

I could only think of the life stories of people who later became the founders of large companies with world-famous names, working without rest. And what was it like for me to follow their example with a newly created family and small children in charge?

But my situation was turned upside down after I discovered the concepts of "bootstrappers" and "indie hackers" from the likes of Arvid KAHL and Peter Levels. Then I was sure that I would create my new project without overexertion and patrons.

However, the issue of lack of ideas still kept me awake at night. Then I decided to follow the brilliant advice of Arvid Kal. It boils down to a recommendation to start with working with the audience, and then move on to ideas:

As a result, my experience at my Agency Wortspiel, as well as at my previous job, told me that I need to look for my clients in marketing. In addition, I realized that I need to focus on working with companies:

"In the B2C segment, you can get the most demanding customers at a low cost. And in B2B - on the contrary: unpretentious customers at space prices."

And now in the process of communicating with representatives of this segment and researching their basic needs, I was able to identify the following two marketing trends.

Companies want to get more independent information. This desire is especially clear among representatives of such locations as California and the EU, under the influence of innovations in legislation such as PECR and GDPR.

And such moments as the unpleasant situation with Cambridge Analytica, increased concern about the likelihood of a dictatorship of the technology industry's grandees and the possibility of misuse of information. At the same time, there is a need for contact between the contractors of the relationship without the participation of any intermediaries. This trend is demonstrated by the growing popularity of Email (newsletters are still popular in 2020).

after that, I came up with two options for implementing a specific product:

Friendly Automate will help you work towards email marketing in small and medium-sized businesses.

Thus, by the age of 38, I became the owner of a personal startup. And this is at the height of the Covid19 hysteria.

How did I manage to reach a thousand dollars MRR

So, I bring to your attention the strategy I used to attract users to a completely new startup company that earns over a thousand dollars in MRR.

Running analysis on a product hunt

18.03.20 Friendly Analytics launched on the ProductHunt platform. This occurred 26 days after the domain name Friendly.is it was registered. 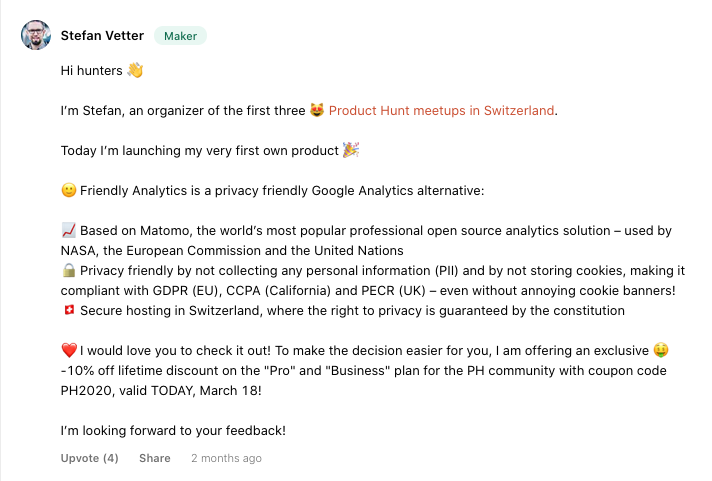 And he managed to get to the main page in a couple of minutes on the main page, and also stay on it until the end of the day. 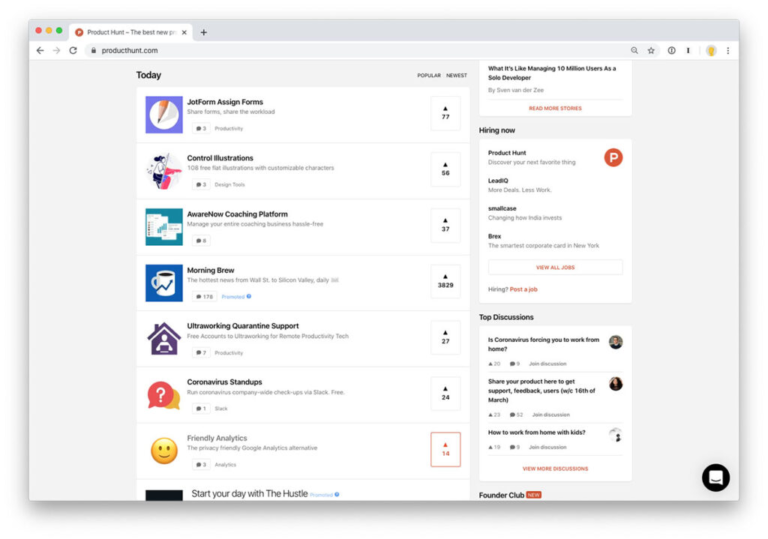 I made good support for the launch through a newsletter on behalf of my Agency (it was received by more than three thousand users at an open rate of 37.5%, which brought 130 clicks to the target page) and also on LinkedIn.

The result of working with friendly Analytics for the day was an excellent twelfth place on ProductHunt, receiving a rating of 5 out of 5 and as many as 120 votes.

And although this brought me to the target page as many as 593 users, it did not affect sales in any way. They just weren't there.

And I think there were two reasons for this.

The first is the absence of a price correction on my part until the end of the recent period. Judge. At least for a monthly subscription, my users had to pay $ 29, which was not cheap. (Tip: on the Eve of the project launch, ask users how much they are willing to pay you for a subscription).

but, I had almost no feedback on the target page at that time. Although that very page had huge prospects for development and growth. On the pages of his blog about indie hackers, Dan Postma shares the secrets of achieving success in this direction.

As a result, it took me as much as 21 days before the first client came to me who paid for friendly Analytics. This joyous event happened on 08.04. and then it seemed to me that I had achieved tremendous success.

And before the first paid customers came to me, the day before, I posted my second brainchild on the network, called Friendly Automate.

And since I now wanted to improve it significantly, I decided on a "soft start".

And in order not to waste precious resources searching for products, I decided to start with the promotion of Friendly Automate among my friends in the first days of April. And already on 07.04 I announced its release in the newsletter of my Agency, as well as in the LinkedIn network.

This allowed me to respond to user suggestions for improving the release on the eve of its official launch.

This trial launch has witnessed a much greater popularity of the second product compared to the first: 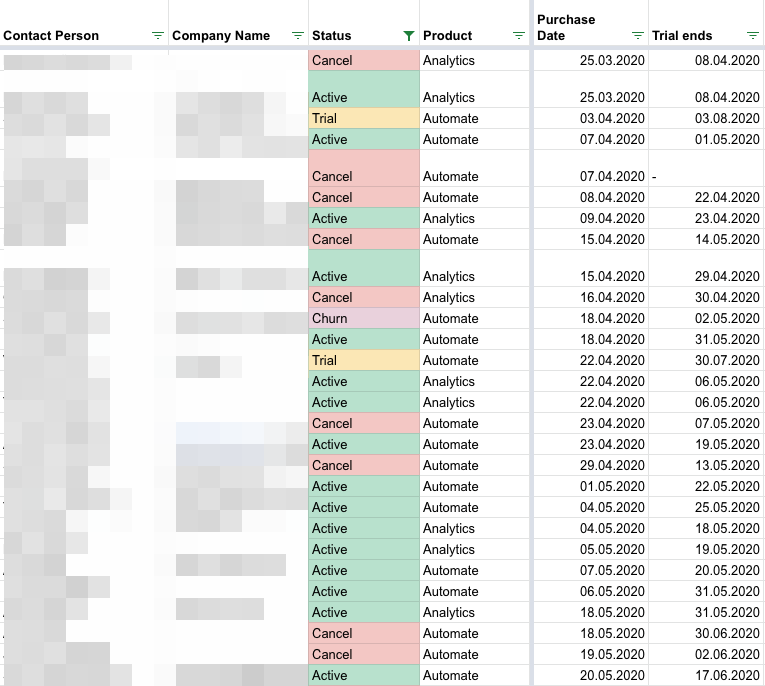 This table contains information about our clients ' path to the $ 1000 MRR mark. 23 clients were enough for us to achieve this indicator. Moreover, 50% of this mass decided to subscribe to the paid version after using the demo version. The "Cancel" column contains information about the number of customers who unsubscribed before the demo version expires. And the "Outflow" column shows how many customers refused to use an already paid subscription. Well, two clients who are still testing the app refused to continue testing it for personal reasons.

It is obvious that immediately after a soft start, that is, the next day, users took four demo versions of Friendly Automate, while a week of rotation of Friendly Analytics within the ProductHunt platform gave absolutely zero results, without bringing customers.

After that, I became confident that it was time to present friendly automation to a wide range of consumers. In fact, this was done within the framework of the Product Hunt platform on 21.04.2020: 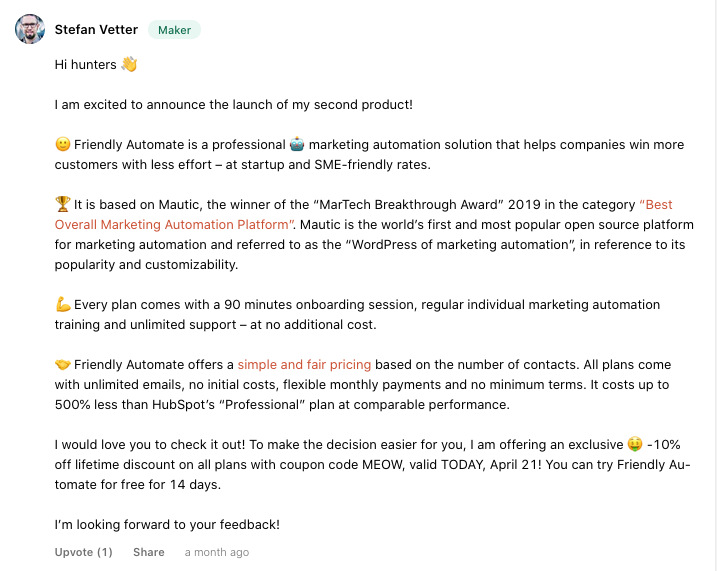 Like my first brainchild, the second one also successfully entered the main page quite quickly, but with a lower rating. By the end of the day, this product had received only 50 votes, taking a modest 31 places.

However, this premiere brought me at least one demo user. Because I think that very soon there will be much more of them. Therefore, from the point of view of financial feasibility, the second application was more successful than the first.

4. The launch was open

This is one of my business models to follow-Buffer. They have become pioneers in terms of corporate transparency. Buffer notes 4 main advantages of transparent business management:

establishing trust between customers and your team;

active implementation of innovative solutions, because your employees are more informed to make optimal decisions;

it makes business relationships fair, for example, in matters of remuneration;

feedback will be much more useful.

Even without constantly generating unique content, it will be enough for you to capture any little things that are constantly happening around you.

"Write it down without creating a new one."

whether by Chance or not, I got my first knowledge about Baremetrics through using their Buffer to publicize my profit Received in 2014. And I'm sure it's the best thing in the world.

And now, six years later, I am once again admiring the genius of the head of Baremetrics, Josh Pigford, who, among other things, is the Creator of the public revenue dashboard for Friendly: 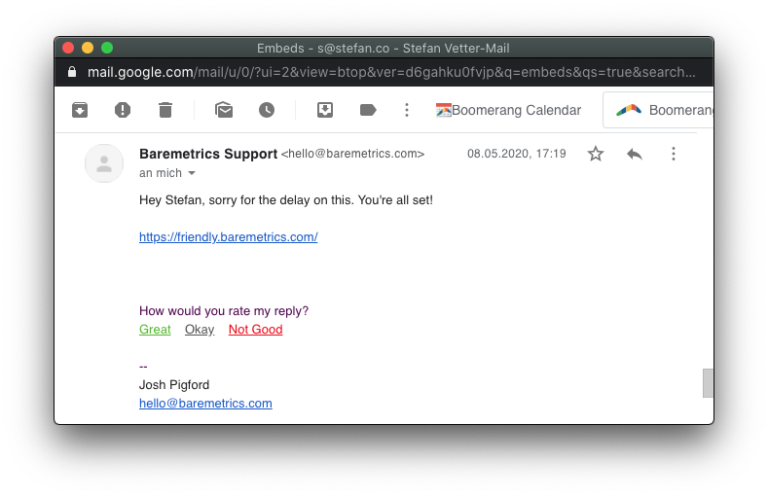 Now it has become the basis of our open start page, which contains our web Analytics and product advocacy. 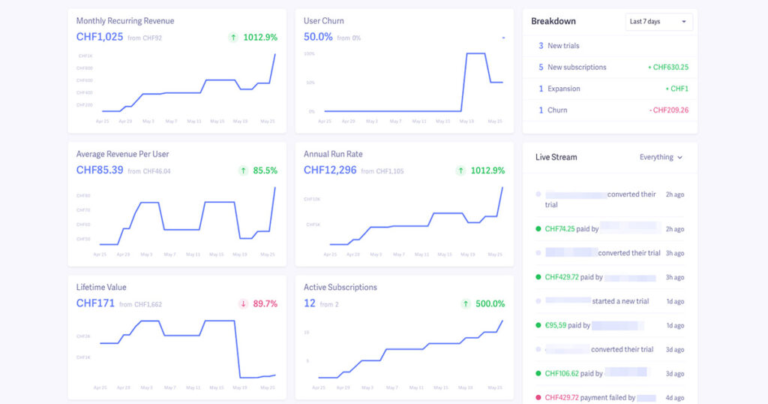 The openness of our startup allowed us to retain customers, constantly focusing their attention, which in the end helped to significantly increase the customer base.

The final massive building block in the structure of our project is our partners: agencies and branches. At that time, 3 of our 14 active users, including the largest of them, were attracted by partners.

And this percentage is still growing. Therefore, you need to start working on the development of the partner network from the very first days of the project's life.

And if you draw Parallels between paid promotion via Facebook or Google and the partner program, the latter option is more stable, because it provides for indefinite payments of a quarter of the funds.

Consequently, the payment given to those who will help us to earn. Therefore, we motivate our partners with a decent piece of pie.

And I prefer to pay my partners rather than Facebook and Google.

What are the prospects?

Thank you to everyone who helped me achieve what I have now. But this is just the beginning of my long journey.

The result of last month for me was the involvement of Jozef Kepler, who became the first employee in the staff of my company and took the post of head of the technical Department. We've also had a freelance employee named Joey since March. And since joining us, he has come a long way from a friend to an integral part of our friendly team.

“Only marketing and innovative technologies can produce results, everything else is a husk.”

I have a lot of "advantages" as a marketer and businessman, but I realized what my main disadvantages are as an engineer (and this is a vital point in our business of launching a technology startup). Therefore, the technical Director was an important person in our team.

My ultimate goal in working with Friendly was not to promote it quickly, but to create a profitable company and enjoy working with our entire team even after many years of working together.

1) Sign up for recieving exclusive relevant case studies.
2) Sign in, if you already registered.
How to be rich
Author: rayzl

Case for earning $14,000 with the famous Reduslim offer
Author: MaikLOL

Related to the level of sales
case study: How to get 73% ROI on solar panels in the USA!
Author: Sadie Flatcher

We go from one million dollars ARR to two in six months without additional investment-we make a profit against the background of the crisis
Author: Roman Smith