Whatever you do, you will never be in PAA
The gold standard of jewellers: the social network
Author: Roman Smith

475% Revenue Boost
A special case of SEO promotion: we get a natural increase in traffic from 0 to 200,000 monthly
Author: Roman Smith

We get a natural increase in traffic from…
White papers aren't crucial for online business, are they?
Author: grald

Vodafone is a leader in the global telecommunications market. Vodafone Ukraine mobile operator operates on the territory of the Vodafone brand, providing subscribers with communication in mobile networks of LTE, CDMA, and GSM standards. The company also owns an online store and a network of online retail stores, which are managed through a subsidiary company.

tell customers about the possibility of purchasing electronics and home appliances through Vodafone stores;

increase the level of profit from traffic received from the paid channel.

We needed to increase our profitability, as well as increase the volume of paid traffic from Google, while maintaining the average return on financial expenses for an advertising campaign (ROAS).

To achieve this goal, our Promodo specialists analyzed all possible optimization options for launching advertising campaigns, and a package of new tools that would help achieve the necessary results. As a result, decisions were made to launch a Google shopping campaign, and

also about the expansion of branded advertising campaigns.

At first Vodafone used only keywords containing brand names of products sold in the online store to promote its products through Google advertising campaigns.

For example, an online store Vodafone, Vodafone store, and the like. 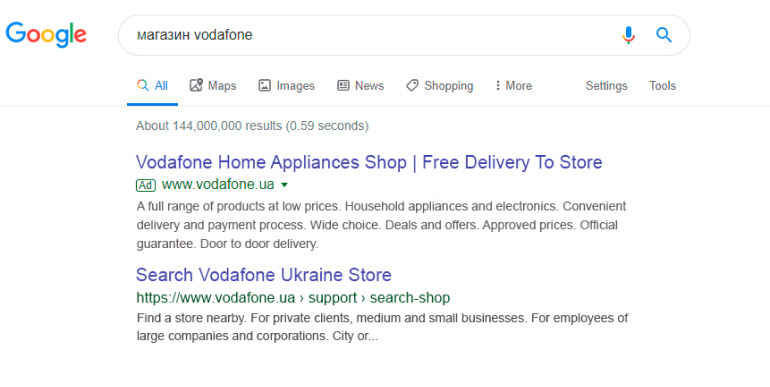 In order to increase the level of engagement of the target audience, our specialists added the non-commercial keyword Vodafone. Moreover, in two variations: in Russian and English. And in order to cut off the traffic of users who are interested only in mobile services, our specialists added thematic queries, as well as the name of tariff plans to the list of stop words. 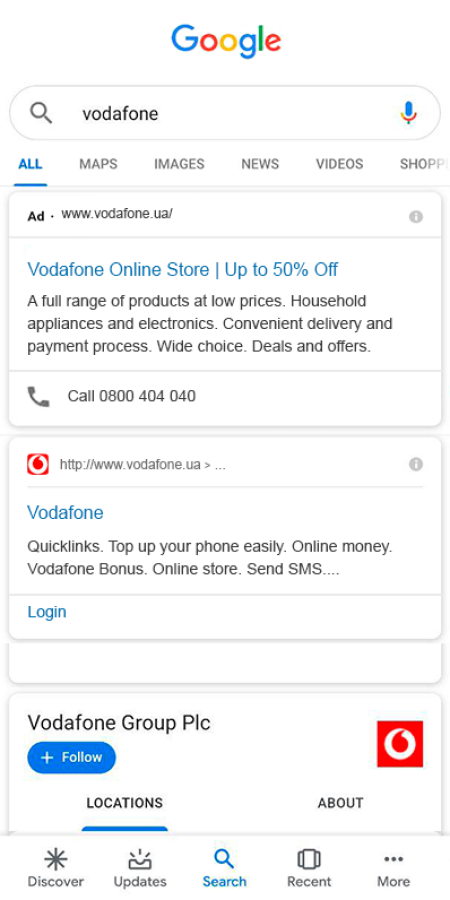 Keyword optimization allowed for a 360% increase in brand traffic.

The amount of conversion received as a result of branding advertising campaigns also increased by 126.7% .

Setting up and optimizing a Smart Trading Campaign

In order to understand how profitable investments are, you need to get predictable results. And to get them, you should use only proven marketing tools. Therefore, to increase the level of sales, we decided to add Smart Shopping campaigns with active ads. Practice has shown that this option of digital sales was the most effective for electronic sales. 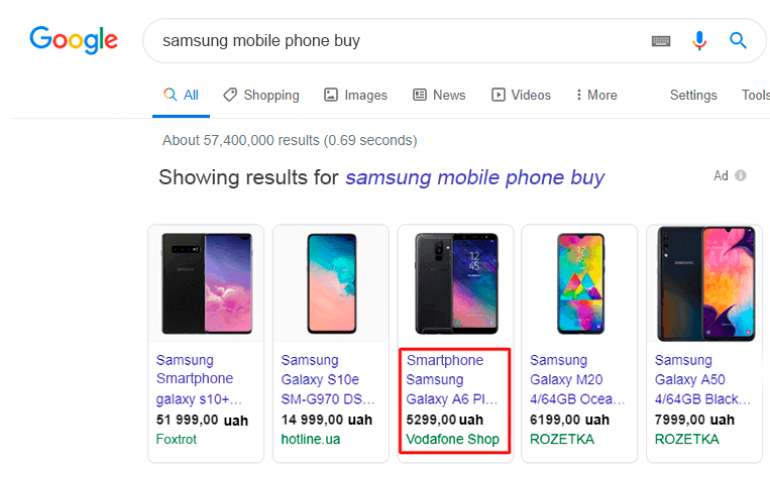 Therefore, at the start, a standard advertising campaign was launched using product segmentation. Only those sections that were characterized by high and average order indicators were selected in order to increase the profitability of the advertising campaign.

But, alas, this move did not meet expectations, since the click price, as well as the transition price, turned out to be quite expensive.

The automatic ad campaign has intelligent settings. In addition, it focuses on getting the maximum profit for each of the transactions. Therefore, on the eve of the launch, we focused on developing a technical tape that would include the entire product line of the store.

As a result of the Smart Shopping campaign, we managed to achieve a 423% increase in the ROAS indicator, and the profit increased by 391.5% .

the level of profit from smart purchases increased by 360%;

It is planned to work on increasing brand awareness, including through smart GDN and media campaigns.

It is planned to work on improving the reputation of the advertising account, as well as launch an advertising campaign using keywords that include product model names, in order to increase the level of coverage of the search interest of users.

Continued optimization of the product feed for organizations, with the addition of additional

1) Sign up for recieving exclusive relevant case studies.
2) Sign in, if you already registered.
Cheap Traffic from the USA. How to Invest $363, and Earn $127,118.
Author: Anna Sky

Whatever you do, you will never be in PAA
The gold standard of jewellers: the social network
Author: Roman Smith

475% Revenue Boost
A special case of SEO promotion: we get a natural increase in traffic from 0 to 200,000 monthly
Author: Roman Smith

We get a natural increase in traffic from…
White papers aren't crucial for online business, are they?
Author: grald